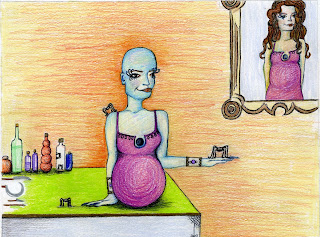 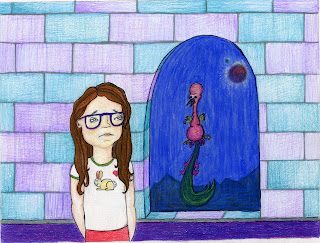 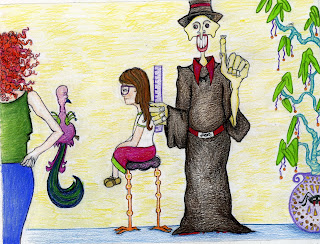 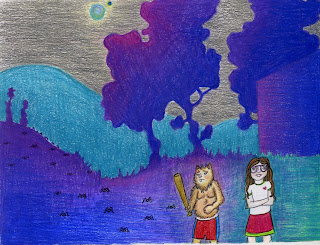 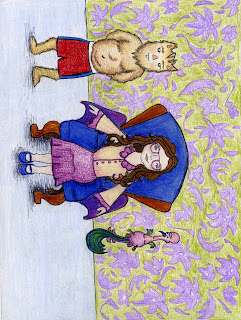 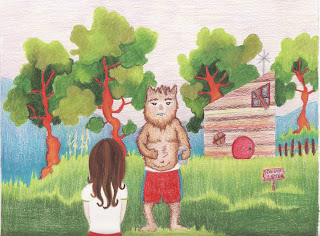 Here are the illustrations I have done for my book so far, they didn't scan very well though. 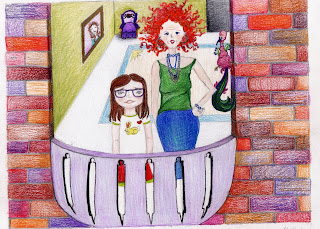 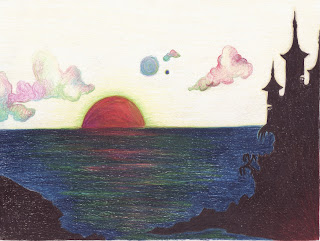 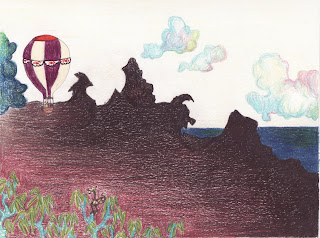 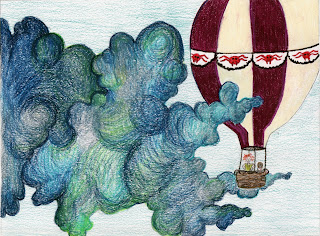 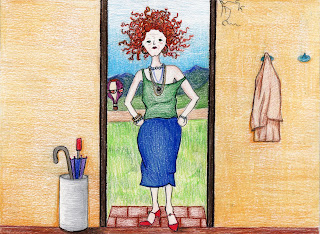 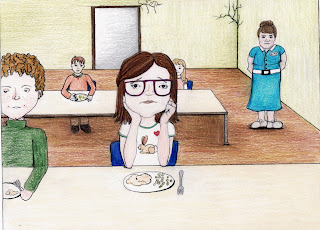 Alphonse Mucha.......pretty much my favorite painter EVER ( for the meantime anyways).
Posted by Amanda Grove at 9:46 AM 1 comment: 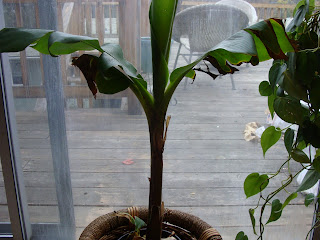 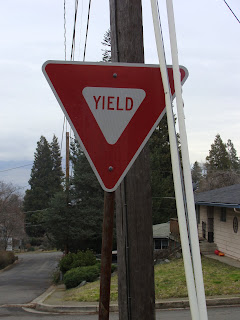 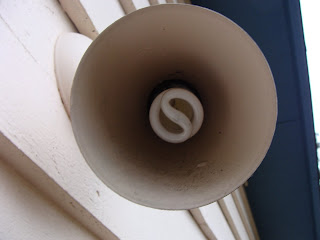 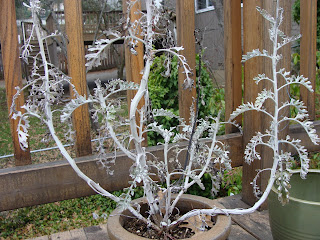 Written description for my project for Art 450-
Book illustration project
1. Dark children’s story with full color illustrations and approximately 12 pages long.
2. My project is a continuation of the book I started making last term. It is a dark children’s story centered on a young girl who travels to a different world. It will be about 12 pages long and feature full color drawings done in colored pencil and ink. The final book will be about 10in by 9in.
3. This project is more about the pictures and design than the story. I created the characters and chose the ones I liked. I then created a story around them. This story has a beginning and an end it is not a comic book. It is not necessarily made for children but could be considered a children’s story.
Here is a plot outline- The story is about a girl named Eleanor who lives in a dreary old orphanage in Germany. One day a strange old woman named Scarlotta comes to adopt her. She takes her away on an air balloon and travels through the sky for many hours until they come upon a stormy colorful cloud. Once they pass through the cloud Eleanor falls asleep and when she wakes up she is in a different world. Scarlotta explains to her that she is now in a world called Valcliff. She will be living in a large castle-like mansion. Eleanor enjoys her new life and makes friends with Scarlotta’s bird-like assistant Flutie. The only thing that bothers her about this new world is the unusual amount of attention paid towards her hair. Scarlotta is always brushing it and each week a creepy large- fingered man named Mr. Fingers comes and measures it. Late one night Flutie appears at Elaenor’s window and explains to her that she is in grave danger. There is an evil spiderlike woman named Lucrecia Malvado who wants to kill her and steal her hair. Flutie tells Eleanor to run straight into the woods until she finds and old shack because there is someone who can help her. She does as Flutie tell her. Once at the shack she knocks on the door and a large fat catman answeres. He recognizes her immediately and ushers her inside. He introduces himself as Grotto and tells her that about 9 years ago Valcliff was a terrible place ran by an evil woman, Lucrecia. Grotto discovered that all of her power emanated from her hair so one night he broke into the castle and stole it. He then took it to Eleanor’s world and hid it on a very young girl, Eleanor. Lucrecia needs to get the hair back before the moon shines on it once more because at that moment the power will flow back into the hair and belong to Eleanor, and Lucrecia will turn back into a loathsome spider. Eleanor hides out at Grotto’s until the sun starts to go down. At dusk the silhouettes of Lucrecia and Mr. Fingers are visible on the hill, they have come for Eleanor. Lucrecia has the power to birth spiders from a hole in her chest and she sends hundreds of them down upon the little shack. Eleanor, facing her fear of spiders stomps and squishes them as she runs out the door and into the moonlight. The power is now hers and Lucrecia is already showing signs of the spider that live within her. Order is restored and Eleanor and Grotto live peacefully in Valcliff.
I want to try to do my own lettering but if not I will type it out it some form of text I haven’t chosen yet. There is no title yet for this story.

4. Not quite sure what “specific products of study ordeliverables” means.

5. The only research I’ve done for this project is basically reading a lot of different children’s books and comic books.

7. I will need to research different fonts and ways of putting together a book including spacing, lettering, sizing, binding, scanning and printing, and editing on the computer.

8.Feb 10th- I will have all the pictures drawn and colored.
Feb 20th- All text and titles typed and attached.
Feb 27th-Cover illustration done
End of term?-All pieces assembled and bound.
Posted by Amanda Grove at 11:48 AM 1 comment: 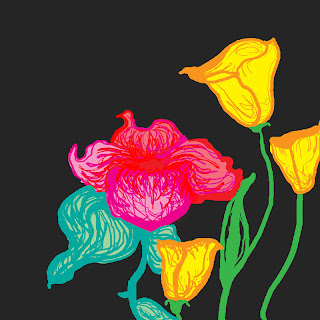 scratch 1
For the first picture I just wanted to play around with something I already knew how to draw while I was trying to learn photoshop.
Posted by Amanda Grove at 10:38 AM 2 comments: 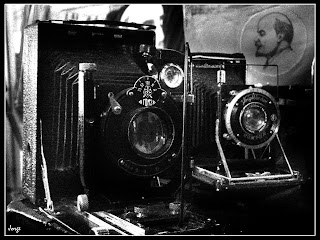 old cameras are my friends. they bring me coffee.
Posted by Amanda Grove at 10:26 AM No comments: